My new, improved website is finished! Huge thanks to fellow Whidbey Writers Workshop alum Sharon Mentyka and her firm, Partners In Design, for all of the hard work to put this together. I’m very happy with the end-product. It looks great, doesn’t it? Thanks also to Scobie Puchtler, our dear friend and next-door neighbor, for the photo session that produced my author photo. The content is a work-in-progress, as I add links, edit pages, and learn about things like tagging. I’m planning to write a new blog post once a month, which doesn’t sound very often when I write it here, but, given the way hours bleed into days and weeks, feels ambitious enough.

I’ve just returned from a weekend in Colorado Springs, where Wiley and I attended our 20-year reunion at Colorado College. We rented a house a few blocks from campus with a group of friends, all of us opting to leave our kids back at home with spouses or grandparents. This seemed to be the choice of most of our classmates, as the only kids I saw at the Class of 1993 gatherings were very young babies. Everyone, apparently, needed to relive their college days in a child-free, stay-up-too-late, drink-too-much atmosphere. Fair enough.

The weekend had many highlights. There was, of course, the eating: takeout from La Casita, our favorite Mexican restaurant, breakfast at the Over Easy, a post-1993 downtown eatery. Before the homecoming dance, Wiley and I had a late-night sandwich at a new organic deli on campus, a few hundred feet from the dorms we lived in the year we began dating. We picnicked on the quad, then spent the afternoon walking around campus, admiring the upgrades — a gorgeous art building, a just-renovated athletic center where students have a view of Pike’s Peak through a plate-glass window while they run on the treadmills: 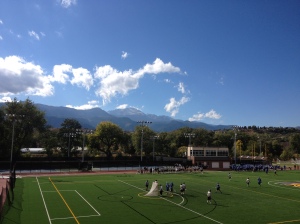 I felt reassured by the same-ness of much of campus: the beer-soaked carpets in the dorm hallways, the fresh-faced students we passed on the paths. It wasn’t a stretch to remember when I was one of them, barely noticing the people twice my age and older who came to campus on Homecoming Weekend. Back then, I was unable to imagine myself in their shoes, people with careers and children, mortgages and marriage counseling, experiences they would not have been able to predict or prepare for back when they were college students.

I loved reconnecting with friends, both those I still see regularly and those I hadn’t seen in years. Tyler, my only classmate who I’ve known since we were babies, was there, so we got to double our reminiscing. We’ve gone to 4 schools together, starting with nursery school at Temple Beth-El in Belmont, Massachusetts. 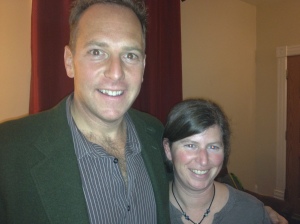 I had my first-ever conversations with classmates at the reunion, telling Jason that a cajon drum would be a great addition to his family’s instrument collection, and talking with Dylan about writing being a muscle you need to use regularly. At our class reception, I tapped on Jennifer’s shoulder, one of the only people there who lived on my freshman dorm wing. We weren’t friends in college, but I remembered our interactions as warm and friendly. Our small talk at the reception quickly gave way to deeper conversation as we learned that we had experienced many parallels in our post-CC lives, including multiple abdominal surgeries and parenting two adopted kids. I feel like I have a new/old friend in Jennifer, even if we don’t see each other until the next reunion. 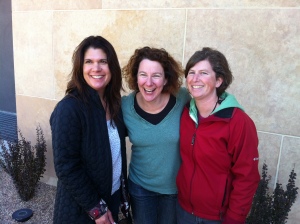 Wiley and I arrived on Friday afternoon in time to catch the tail-end end of the faculty reception. I saw Dan Tynan, who taught one of my favorite classes, “Spiritual Quests in Poetry,” which featured my first visit to a monastery during a stint at CC’s retreat center in Southwestern Colorado. “I know you,” he said brightly. I’m always surprised that professors I had once so many years ago remember me, especially since I didn’t talk much inside the walls of my college classrooms, a fact that will surprise my grad school peers. I saw Barry Sarchett, my very first college professor, who greeted me like an old friend. Barry is a teacher I’ve gotten to know better in the years since I was his student, as I’ve visited campus in various alumni roles, and seen him at CC-related gatherings in Washington, his childhood home and my adult one. We still have a teacher-student dynamic, where I listen as he dispenses advice. “Being a parent is a really important job,” he says when I tell him my Mom-role leaves little time for writing. “You don’t want to fuck it up.”

I left the weekend, not so much nostalgic for my undergrad days, but missing academia, though it’s only been a year since I completed my MFA. I have been taking a break from teaching for a little while because of the toll it takes on my writing schedule, but a visit to the CC campus made me itchy to get back into the classroom.

The reunion also left me full of gratitude for the privilege of my education, from Temple Beth-El Nursery School with Tyler all the way through the Whidbey Writers Workshop. Those four years of college were pretty darn awesome. CC is not where I honed the creative nonfiction skills that mark my current, hopefully lasting, career. My college professors are responsible, though, for teaching me how to think. CC is where I found my voice, quiet at first, becoming louder over time. Now you can’t shut me up.