— from On the Radio by Regina Spector

This morning, a first: me, on the radio! My friend Marrie Stone (a fellow member of Jess Walter’s Rock Star Workshop at the 2016 Tin House Summer Workshop in Portland) co-hosts a program called Writers on Writing. They have big-time people on the show: Tom Perrota. Cheryl Strayed. Roxanne Gay. And on and on. It turns out that they have debut authors too, and Marrie kindly agreed to have me.

I’ve had long-held fantasies of being on the radio, but they are more like me reading an essay I’ve written on This American Life or All Things Considered, or the director of NPR calling me up to tell me Terry Gross is retiring and would I like to take over for her? In other words, me reading things I’ve already written, or me asking the questions.

But having to speak off-the-cuff? Not really my strong suit. My kids go to a school where they have to speak publicly often, so I went to my 8-year-old, Helen, for advice.

“Be prepared,” she told me. “Imagine what questions they are going to ask you, and think about how you’ll answer them.” Very impressive for her to know that’s exactly what to do. So I did. I was nervous, and I may have stammered and um-ed my way through, but I don’t think so. My answers were long, but that’s not a fatal flaw. And I had fun! Marrie is a great interviewer. The time flew by as it does when you are talking to a friend and/or talking about yourself.

The station, KUCI, is in California, so the interview took place over the phone. Even so, I made it a special occasion work day by showering and putting on a nice sweater and a special necklace so that I would feel more like an almost-47-year-old soon-to-be-published author. My dog (ironically, considering the book’s subject) developed a case of intestinal distress, so the hour before the interview saw me running back and forth from yard to house, amassing a pile of amusements for the dog to entertain herself with outside that would not further the distress. She would bark to come in, I knew, so I positioned myself in the corner of the house farthest from the back yard: Helen’s bed. So there I sat among the stuffed animals in my nice clothes, hoping the occasional barks couldn’t be heard through the phone line.

Here’s the part where I would include the link to the show’s podcast, if I’d been patient enough to wait for this blog post until that came out. But I wasn’t, so I’ll post it when it’s available. In the meantime, here’s another photo of GUTS In the Wild: 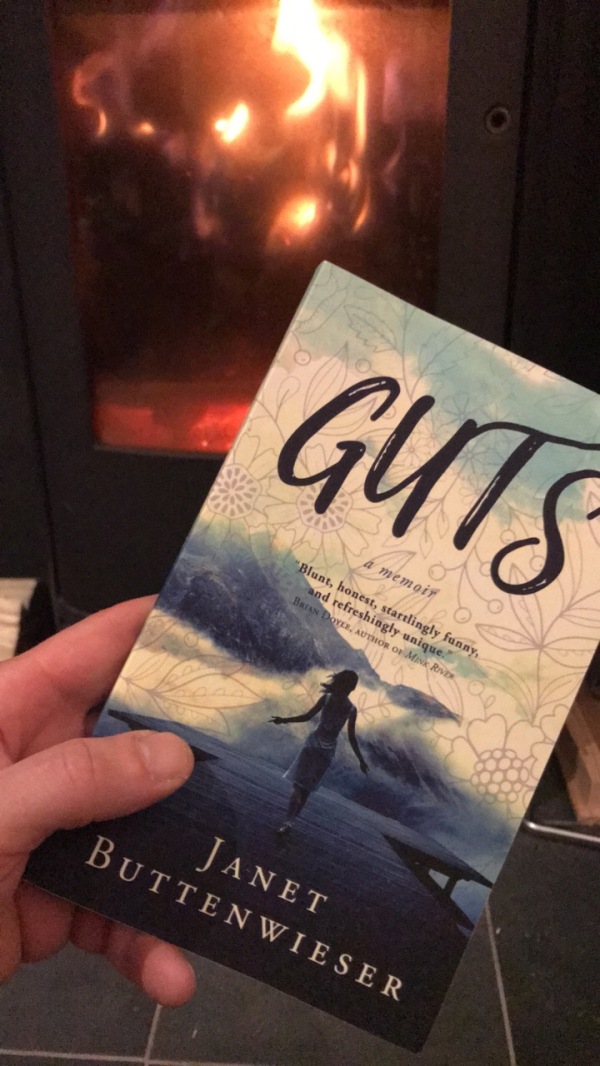 Isn’t that fireside the coziest? This is a special GUTS photo, taken by our dear friend and Beth’s former husband, Kevin from the home he built himself in Sitka. So GUTS has already left the Continental US! I hope she’ll continue to be well-traveled.

Soon I head to beautiful Whidbey Island to prepare for my upcoming events in support of GUTS. I now have several things on my calendar: author talks and readings and even a radio appearance!

Here is my first photo of GUTS in the wild, Christmas Day 2017, Raglan, New Zealand:

Thank you Penny for sending this photo and thank you Dan for gifting an advanced copy to Penny for Christmas. I like the look of my book nestled among the tropical fruit.

I’m feeling overwhelmed (in a good, awash in gratitude kind of way) for all of the support I’ve received from friends and family emailing me to tell me how much they like the book, or that they’ve ordered it, or that they are bringing their entire book group to my launch party! It’s a too-many-people-to-thank situation all around, but I’m going to thank a few anyway:

T-Minus 41 days until 2/13/18, the book birthday of GUTS! Right now it’s out in the world in a mostly “coming soon” kind of way, but each mention of me or GUTS in a public forum still catches me by surprise.

First, there’s the pre-order. I can go to Amazon, Barnes & Noble, Indiebound and see my book. I have an author page on Amazon, with my photo and everything. I took advantage of a special ad sale for authors and sprung for an ad in the Jan/Feb (“Inspiration”) issue of Poets & Writers, a magazine with a huge circulation. There’s GUTS in the New Titles section on page 82, and my name, spelled correctly and everything.

Next, I’ve started scheduling events, here in Seattle and elsewhere. Hugo House, where I teach occasionally, is kindly hosting my book launch party on 2/13 at the very cool Hotel Sorrento. My friend Stephanie Barbe Hammer is jetting in from LA to emcee the event, and former Washington State Poet Laureate Elizabeth Austen is leading an onstage Q & A.

Family ski trip to Colorado? I’ll give an author talk at the library and then head down the road to Boulder to teach a class called “Acts of Courage: Writing and Publishing Memoir.” (Big thanks to Tin House 2013 friend Ashley Simpson Shires for connecting me with the Colorado Writing School, which is willing to pay me even though they’ve never met me).  I’m quite humbled by everyone’s generosity and enthusiasm.

Stay tuned for more news as I have it!