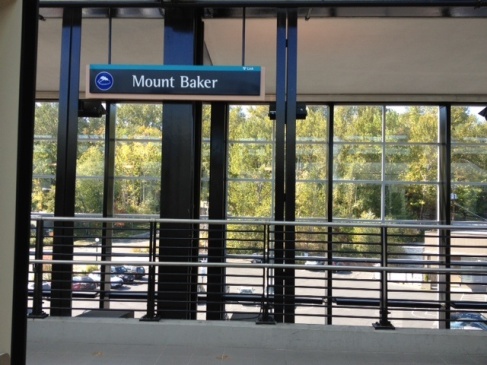 Today I had a lunch date at the airport.  My friend Di had a long layover at the airport.  We made our lunchtime meet-up plan before I set my car-free goal.  So I got to experience a first: riding Seattle’s light rail.   I felt like a child on an amusement park ride.  I’m not blessed with the ability to read in a moving vehicle, so I stared out the window at the parts of the city I don’t see very often.  We glided through Rainier Beach, the neighborhood where I had my first library job.  There’s something about autumn that causes surges of nostalgia within me, perhaps all those years of back-to-school welling up.  So I took in the scene with an extra layer of sentimentality.  Passing a large community garden I used to drive by on my way to the library, I notice something I don’t remember being there before: rows and rows of corn.  I’m used to seeing all manner of produce growing in my city, but a cornfield between public housing developments is a first.  The sun is angling against the tops of the stalks just they way you’d want it to if you were a painter setting up your easel in front of the scene (though where you could put an easel where you wouldn’t get hit by a car, I’m not sure.)

After a lovely lunch I light-railed back downtown, then took a bus to Capitol Hill.  I had an hour to catch up on email at the Elliot Bay Café before meeting my Wiley and my friend Iris for dinner.  We were on our way to a reception for award winners and finalists of the Washington State Book Award – my former thesis advisor, Ana Maria Spagna, was one of the finalists, and a group of folks from my MFA program went to the party to celebrate.  The party was at Hugo House, where I taught a class last summer, and the evening got me energized to teach there again.

One of the things I hadn’t thought about before this week, perhaps only an issue for the small-bladdered bike commuter, is how many times I’d have to find a bathroom away from my usual stomping grounds.  Now I know where the bathroom is in Macy’s, and the soccer fields next to Green Lake.  Some bathrooms require codes, like the one at the Oddfellows Lounge where Iris and Wiley and I dined.  I asked the bartender for the code, and beelined for the restroom keypad saying “7379, 7379” over and over in my head.  I must’ve had the same focus and drive once I entered the bathroom as I headed directly for the stall, not taking in my surroundings.  When I came out of the stall, I looked in the mirror and startled at the site: a man standing at the urinal.   My thought process: “Why is there a man in the women’s restroom?  Why are there urinals in the women’s restroom?”  I had a flash of being in Italy, where the public restrooms are co-ed.  Was I in Italy?  No, I was in Capitol Hill.  In the men’s restroom.  The man turned around and had a similar startle when he saw me.  Fortunately, it struck him as funny.

So I’ve had two experiences this week that will etch themselves in my brain: I don’t think I’ll forget Caleb’s car seat again, and, from now on, when I approach a bathroom door, I’ll double-check the sign.